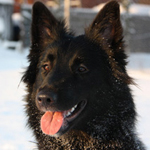 Lann Morian Ishtar
Import: "Sweden"
Born: 01-03-2009
Female
Ishtar was imported from Sweden. She had a super pedigree and came out of very good working lines.
Unfortunately she did not show it enough in training.
Ishtar was still a very nice dog to work with and I learned a lot from her. 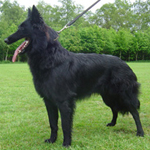 Famy de Marcolina
Import: "Belgium"
HD-A
Born: 15-08-2006 - † 2008
Female
VZH
After Ramses I thought I had taken a good bitch from Belgium for the kennel.
I trained IPO with her.
Unfortunately she was very aggressive and she had OCD in the shoulders even before she became one year.
She had surgery so I could still train with her, but breeding was excluded allready.
Because of her character I needed to put her to sleep. 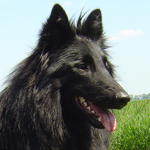 Ramses
Born: 22-12-2004
HD-A
Male
G&G 1
With Ramses I started training IPO. It soon became clear that his character was not strong enough.
Through him I startet to think about the Groenendael breed wich would as Belgian Shepherd easily be able to train IPO.
Because of this I came to the decision that i want to improve the character of the Groenendael breed and I have
became involved in the breeding of Groenendael working lines.

Isis Mon Chien Favourite
Born: 26-03-1994 - † 2005
Female
This was our second female with a very different character.
Sweet but watchful.
She was especially by her beautiful nature.

Rosette des Cinq Coquilles
Born: 06-12-1990 - † 2004
Female
G&G 3
Roxet, my first Groenendael.
With her I started in Obedience, I've even done a few contests with her.
She had a good drive to work and I always have trained with her with great pleasure. She became 14 years.
My buddy!
-- Disclaimer --